It was the first full week of the season on the River Tay last week and thankfully for once, the weather played ball. A large area of high pressure centred itself over much of the UK including Scotland and this led to a mainly dry week with sunny spells and variable amounts of cloud. This was a welcome change to the strong winds and heavy rain of recent weeks. On some afternoons it felt almost spring-like with temperatures into the low double figures. Water levels gradually dropped through the course of the week and by Wednesday river levels were perfect for many beats on the river with decent water clarity. The water temperature last week was 39.8 degrees Fahrenheit which is 4.3 degrees Celsius. As the weeks progress there should be more fresh fish entering the Tay system increasing the chances of making contact with some early season silver.
Many anglers that did venture out to wet a line enjoyed some rod bending action with a fair number of kelts and older fish being caught up and down the river. It was also good to see a handful of fresh fish landed and well done to all those successful fishers who have already landed their first fish of the decade. In fact, there was an average of more than a fish a day caught from the Tay system which is reasonable considering that it was only the first full week of the season and fishing pressure, on the whole, was light.
It was good to see Loch Tay produce its first fish of the year on Saturday. Mr Don Wallace was fishing with seasoned Loch Tay angler Mr Robert Mcfarlane when he landed a magnificent fish weighing over nineteen pounds. This was Mr Wallace’s first ever salmon and what a fish to open your account on the loch with. The fish had some seal damage but swam away unharmed and strongly. 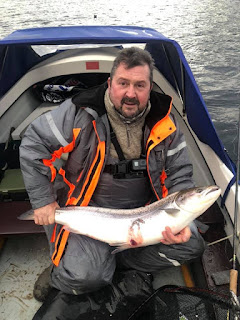 On the upper river the Lower Bolfracks Beat produced a fish on Friday. With water levels gradually dropping through the course of the week many beats on the middle river enjoyed decent fishing conditions. This was certainly the case on Wednesday when the Lower Kinnaird Beat got off the mark. Mr Mike Cook was fishing the Ferry Pool when he hooked a strong fish on a twenty-eight-gram purple toby. After a good fight an eight pounder was landed and safely returned unharmed. Hopefully this will be the first of many salmon landed on the beat. 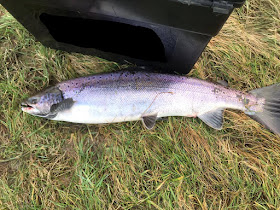 An eight-pound salmon caught from the Lower Kinnaird Beat

It was good to see the Dalmarnock Beat get its season up and running on Monday. Mr David Kyle was the successful angler who caught a lovely fresh springer from the famous Dalmarnock Bank Pool. The fish was caught on a zebra toby lure and is the heaviest salmon Mr Kyle has caught to date, weighing a magnificent eighteen pounds. Catching a January salmon is no mean feat, and this is a fish that Mr Kyle is unlikely to forget for some time. There was nearly a second fresh fish landed in forty-eight hours on the beat. Mr Mark Paul was spinning in the Bridge Pool when his line tightened. After a long fight, the fish was ready for the net and it soon became apparent that it was fresh. However, the fish decided to take one final run and the rest is history! The Dalmarnock Beat has a decent record of producing January fish with fresh salmon caught from the beat on opening day in recent years. 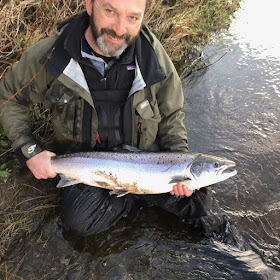 The Couper Grange Beat on the River Isla also produced a fish on Monday. This was the first tributary on the Tay system to produce a fish this season. There was more success on the Isla on Friday with the Keithick Mains Beat producing spring silver and hopefully, plenty more will follow in the upcoming days and weeks. Monday also saw the famous Taymount Beat produce its second fish of the year and there was more success on the beat again on Wednesday. At this time of year beats below the Linn Pool can be productive especially in high water. 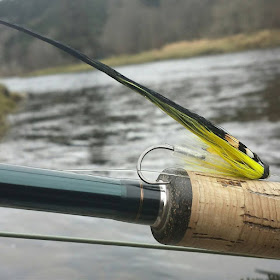 Maybe the perfect weapon to tempt a big Tay springer next week?


It is likely that more fish would have been caught from the river if there had been more anglers fishing but it is still very early in the season. However, the fish that were caught were in excellent condition and it just shows what the Tay system is capable of producing at this time of year.
With some nice fish already landed over the past few days why not wet a line on the Tay next week? With fish already in the system and more running the river on a daily basis, there might just be a January springer with your name on it!

We would like to thank all the ghillies and beat owners on the River Tay system who have contributed to this report by providing their time and information as the weekly report would not be possible without your help and support. If you would like to share any interesting stories or pictures from your time fishing on the River Tay for the purposes of this report, please free to contact us at info@salmonfishingholidaysscotland.com

MORE RODS ARE LIKELY TO LEAD TO MORE FRESH SPRINGERS BEING LANDED
(River Tay salmon fishing prospects week commencing 27th January 2020)
The past week has seen mainly settled dry conditions predominate across much of Scotland including Perthshire. This was courtesy of a large area of high pressure centred over the UK. However, on Sunday a cold front moved South and East across the country, and this has signified a change in the weather pattern. Next week is set to be much more unsettled as a number of low-pressure systems bombard the UK from the Atlantic on a reinvigorated Jetstream. This will lead to frequent spells of heavy rain and wind and it is likely to even be some snow which could fall to lower levels. Temperatures will fluctuate quite markedly before it finally turns milder by the end of the week. Monday will be mainly dry with the chance of the odd wintry shower. Tuesday will see more showers in a brisk westerly wind. Wednesday should be mainly dry before more showers or longer spells of rain affect many parts on Thursday with temperatures rising.
There were fish caught from the upper, middle and lower river last week as well as on Loch Tay and the River Isla. It is likely that more fresh fish would have been landed if more rods had been fishing.
Next week there is a good chance of making contact with a fresh fish almost anywhere on the main river. Loch Tay produced a fish last week and is also well worth considering at this time of year. As always there are no shortage of options when it comes to fishing on the Tay system, with fishing to suit all tastes. The river offers tremendous value for money at this time of year with anglers being able to fish on some of the most famous and prestigious beats in Scotland at a very reasonable price. So why not wet a line on the Tay next week? You might just make contact with some early season silver!

Good luck to all those anglers fishing on the River Tay next week.
Tight lines,
Samantha and Sandy Datta

Tactics for the River Tay during the early spring period (January-March)
The ghillies on the River Tay are all highly experienced and have an intimate knowledge of their beats. Their advice and guidance are key to success. Please contact your ghillie for up to date advice on tactics and what tackle to bring prior to visiting the River Tay.

Fly Fishing
During the early spring months water temperatures are often low and river levels high. In such conditions, the depth at which your fly is moving through the water column can be the key to success. Often you may be required to use floating lines coupled with sinking polyleaders, intermediate or even full sinking lines. It is therefore important that you have a fly rod that can work in harmony with a heavy line. As the Tay is a big river usually a powerful fifteen-foot rod with a ten-line rating will cover almost any eventuality. 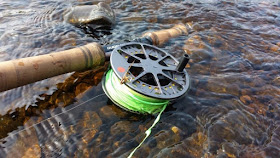 Make sure your fly reel has a good drag system
In terms of lines whether that be a full Spey line or Shooting head system a floating line coupled with a selection of polyleaders of various sink rates can work well. In higher water, an intermediate or full sinking line may be required to produce the best results.
Make sure that your fly reel has got an adequate backing capacity and a good reliable drag system. On the River Tay when that line tightens the fish could turn out to be that one of a lifetime. It is also important during the early spring period to use leader material with an adequate breaking strain. Usually a breaking strain between fifteen and eighteen pounds ideal.

Tube flies can work well during the early part of the season
During the early part of the season, tube flies often work well. If the water temperatures are low weighted copper, brass or even tungsten tubes of a decent length will allow your fly to get well down and close to where the fish are likely to be lying. In cold weather, the fish are unlikely to be keen on moving fast so it is better that your fly moves through the water column at an adequate depth and not too quickly.

Spinning
A powerful spinning rod between ten and eleven foot is usually more than adequate to cover the River Tay. The rod should be able to comfortably cast lures weighing anything from eighteen to forty grams. A good fixed spool or multiplier reel with a reliable drag system is perfect for the River Tay. The reel should be able to accommodate a large amount of either nylon or braided line with an adequate breaking strain. 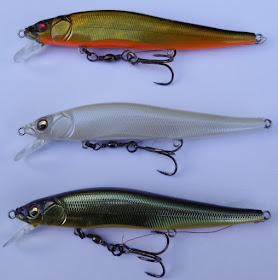 In terms of lures, spoons like the Toby, Salmo Toby and Blair variety work well on the river. These can range in weight from eighteen to forty grams. Devon Minnows can also be effective on the River Tay during the early spring months. Vision 110s and Rapalas are also lures which are well worth considering.

Harling
Harling is a method unique to the River Tay which involves fishing from a motorised boat. This method is employed on many beats and can be highly effective during the early spring months. 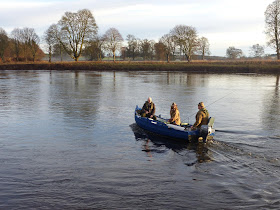 Setting out to do some harling on the Meikleour and Upper Islamouth Beat
Usually, two or three rods are placed in rod holders with various lures and then the ghillie skilfully combs the water by moving back and forth in the boat, whilst gradually dropping downstream, covering the likely lies on the beat. Harling is a method which is very much water height dependent and is practised at the beat ghillies discretion.

TDSFB Conservation Policy
All anglers fishing on the River Tay system are reminded that the TDSFB’s policy from January 15th to 1st of April is that all spring salmon must be released. This means that the TDSFB has a 100% mandatory catch & release policy of all salmon caught. This is in line with the Scottish Government Statutory Conservation Regulation. Even if the fish dies it must still be returned to the river.
It is also worthwhile remembering when releasing fish to keep them in the water for as long a period as possible and to use minimal handling. Please also give the fish plenty of time to recover before releasing them. It is important that anglers treat their quarry with the utmost respect at all times.